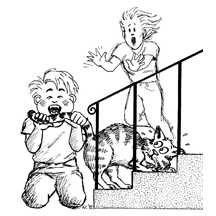 Your response to biting should leave no question but that you mean business. Make the rule absolutely clear, “Don’t bite. It hurts. We don’t bite people.”

• First, give your child verbal disapproval in a sharp voice. Say, “No biting.” It’s fine to startle your child for this type of behavior.

• Second, put him in “time-out” for a few minutes. Use a boring place like an out-of-the-way corner.

• Third, offer him an alternative behavior, such as biting a toy animal. Tell him, “When you feel like biting, it’s okay to bite the horsey, but we never bite people.”

• Fourth, never bite him back, because that will only teach your child that it’s okay to bite if you’re bigger.

• Fifth, if you’re not making progress, try to interrupt the behavior at an earlier stage. When it looks as though you’re child might bite another, send him off to “time-out” before the victim is hurt and screaming. Also give the victim some noticeable sympathy.

In summary, biting behavior will make your child very unpopular, so quickly remove it from his repertoire.