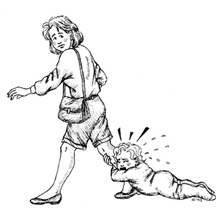 Separation anxiety, the fear that an infant experiences when he is away from a mother or a primary caretaker, usually begins at around six or eight months and peaks at about a year and a half. It’s a normal part of development that your child recognizes his own being and that of others.

In fact, pediatricians watch for this during well-baby check ups, so don’t feel embarrassed if your child wants to cling to you at the doctor’s office. Hear are some tips, if we must leave our little ones, that might make the transition easier:

• Tell a child that you’ll be back after an event, say his snack, instead of saying in three hours.

• Leave your child at a sitter’s house with a security blanket, book, favorite toy; anything familiar is good.

• Kiss the child’s palm and close the fingers into a fist, explaining that if there’s a need for a kiss, there’s one in there ready and waiting.

• Many parents feel that sneaking out is sometimes best to avoid tearful scenes, and others feel that it’s important never to sneak out. I suspect children have survived both methods, though my bias was to live with the guilt as I heard the tears and the cries as the door shut behind me.