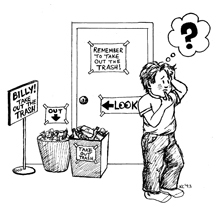 Many kids do poorly in school because they have a hard time remembering the many different kinds of facts required for academic success. Here are some techniques you can encourage your child to use to help him develop a better memory for all the information he has to digest during the school day:

• Suggest that he form visual images in his mind related to words he must memorize. For example, to remember the three reading words, “egg”, “shoe”, and “paper” in order, have him think about an egg being stepped on by a shoe, and cleaned up with a piece of paper!

• Suggest rhymes he can use to remember facts. A well known example is the rhyme “Thirty days hath September, April, June and November!”

For more information about other memory techniques, read the book Use Both Sides of Your Brain by Tony Buzan.