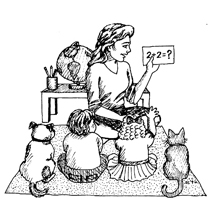 A growing number of parents around the country are taking their children out of both public and private schools and teaching them at home. There are several advantages to such an action.

• First, children have the opportunity to learn at their own pace without feeling pressure to keep in step with the school’s timetables.

• Second, children can learn in an environment where academic skills are more likely to be directly applied, as in learning about fractions through doubling a recipe in the kitchen.

• Finally, students are free to learn for its own sake and not simply to earn grades, prizes, rewards, or to compete with other children.

There are some drawbacks to home schooling that parents should also keep in mind, however.

• First, it requires a major commitment from at least one parent, willing to spend a good part of each day working closely with the child.

• Second, the child may become isolated and not receive the stimulation from other kids so essential to social development.

• Third, parents may home school their children simply because they’re afraid to let go of them, or they’re unwillingly to let them find their own way in the world.