Winners from the Holiday 2019 Report 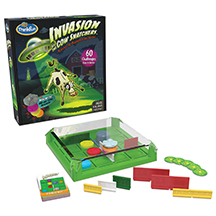 Invasion of the Cow Snatchers

Invasion of the Cow Snatchers is an absolute homerun by Thinkfun. This magnetic game has building elements, logic problems, hand-eye manipulatives, and a big ol’ sense of humor. Since Invasion of the Cow Snatchers is designed to be played solo, there is no scoring. Without a scoring component, there is no winning or losing in cow snatching (sounds like a Country saying). This absence of scoring is ideal for children who are easily stressed or deterred by competition. And, since there is no timer to beat, kids can spend as long as they need to solve the problems, which can also be solved collaboratively. Basically, there are lots of non-competitive ways to play this game. The game is also quite educational as players are learning, using both logic and spatial awareness. When you pull a card with a two-dimensional image of the puzzle you need to then construct the three-dimensional version of it. This process requires focus, forward-thinking, experimenting, patience, and delayed gratification. The concept is smart, and the toy is sturdy and well-made. There are numerous puzzles to solve, making the value quite strong. Some testers told us that their kids liked to play this as a way to decompress during the day. Perhaps it will for your kids, perhaps not, in either case Invasion of the Cow Snatchers sure is fun!