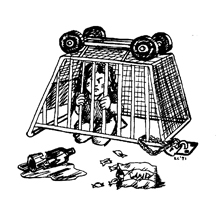 Toddlers can learn a lot by going shopping with you. They can also get into trouble at the supermarket, so here are some tips.

• First, to prevent grabbing food off the shelves, distract your child. On arrival, give her a snack such as animal crackers. Keep her sitting in the grocery cart seat and hand her foods to place in the basket. Talk with your child as you shop so that she feels involved.

• Second, for having a temper tantrum when told she can’t have a toy or candy, remain firm. If your child is having a tantrum in a safe place, walk on and she’ll probably stand up and follow you. If your child is near breakable objects or is a reckless child, put her in the grocery cart or take her outside for a time out.

• Third, for running off, put your child in the grocery cart for three minutes. When you let her out, give her something to do this time, like helping you push the cart.

• Finally, if you child constantly misbehaves at the store, leave her with a sitter next time you go, but be sure to tell her that you’re going shopping. Don’t take her again until she promises to stay with you and not to touch anything without asking first.