Winners from the Spring 2015 Report 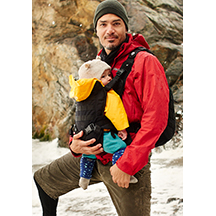 This baby carrier was described to us by numerous testers as being the man’s version of the Baby Bjorn, and it’s unmistakably masculine. It’s so masculine, in fact, that its style might be characterized as SWAT-bro or body armor-chic. It’s well-constructed, quite rugged and it fits a guy’s body proportions well, making it a good carrier to bring along when Dad is certain to be the one doing the carrying. The initial setup is easy and the design shows clever inspiration – for example, the shoulder straps roll up and are secured with a Velcro strip, keeping them neat and out of the way. The Mission Critical Carrier is both forward and backward facing, has a zippered pocket that holds a sleeping shade, a front panel containing loops (to hang manly stuff on?), an easy-clean liner that can be removed and washed and 3 sets of clips hold your baby in place. Unlike other carriers, the back portion of the carrier is one solid padded piece instead of straps, that offer a nice level of total back support. Scores from both Moms and Dads were strong across the board.