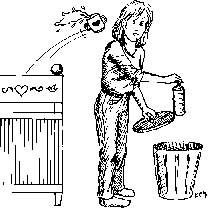 Breastfeeding or bottle-feeding can be considered prolonged after about 18 months of age. However, most children will eventually give up breastfeeding and bottle-feeding on their own by about 3 years of age. Delayed weaning should be considered abnormal only if it is resulting in your child’s refusal to eat any solids, anemia, tooth decay or baby-bottle caries; obesity from overeating; daytime withdrawal and lack of interest in play due to carrying a bottle around; frequent awakening at night for refills of a bottle. Only initiate weaning if your family is not under stress (such as might be caused by moving, etc.) and your child is not in crisis (such as being sick or trying to achieve bladder control).
The weaning process from bottle to cup should always be done gradually. The “cold turkey” approach will only make your child angry, clingy, and miserable. To eliminate your child’s bottle dependency: 1.) Immediately stop allowing your child to carry a bottle around during the day. This “companion” bottle can accumulate germs that may lead to vomiting or diarrhea. 2.) Immediately eliminate any bottle that your child takes to bed. In addition to causing sleep problems, it carries the risk of causing tooth decay. Once you have accomplished these changes, you needn’t proceed any further unless you wish to eliminate bottle feedings completely.
To completely eliminate all bottle feeding, here are some suggestions: 1) The process should be gradual. Before each bottle feeding, offer milk in a cup. 2) The bottle feedings should be eliminated in the following order: midday, late afternoon, morning and bedtime.
The last feeding of the day is usually the most important one to your child. One feeding can be eliminated every 2 to 4 days depending on your child’s reaction. Replace each nipple feeding with a cup-feeding and extra holding. When it comes time to give up the last bottle of the day, gradually reduce the amount of milk on a daily basis over the course of a week. Once the bottle feedings have stopped, your child’s intermittent requests can be responded to by holding your child. Explain to your child that all the bottle have been given away. You may actually want to have your child help you carry the bottles to a neighbor’s house. This should help you and your son in the weaning process. If these approaches do not work after 1 month, consult your physician.