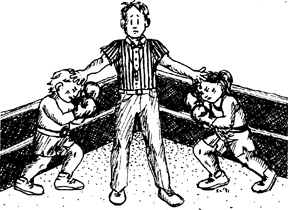 The degree to which you interfere in kid’s squabbles depends a great deal on their ages. The younger they are the more likely you’ll probably find yourself soothing and separating.

Little kids need help in learning how to take turns and make compromises. As they get older they’re better able to take care of themselves, and it’s best not to play referee if you can avoid it. Try to let them settle their own differences. If you do have to step in, be careful not to concern yourself about who’s wrong and who’s right. Still here’s some successful ground rules that might work for you:

â¢ One child divides the snack, the other chooses his or her portion first.

â¢ Whoever says, “me first” is automatically last.

â¢ The child who makes fun of another’s punishment gets the same.

â¢ Fighting in the car will result in the car being pulled over to the side of the road and parked until quiet is restored.

â¢ And finally, let your kids know that tattletales will fall on deaf ears.