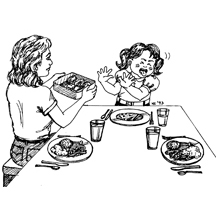 Children of all ages and most adults have some food dislikes. If this is the case in your home consider the following:

• Second, if your child has a strong food dislike, as with one that makes him gag or vomit, that food should no longer be served to him.

• Third, for other food dislikes that don’t cause physical reactions, have a minimal amount rule. Tell your child that he must taste each food, that’s all. By age five you can pass a law requiring one bite per year of age. The six year old eats six peas.

• Fourth, don’t make desserts an area of friction, since desserts are not harmful. Allow your child one serving, as long as he tries the foods he dislikes.

In summary, keeping meal time pleasant is your highest priority. If you’re still worried about your picky eater, just give him a vitamin pill once or twice a week.