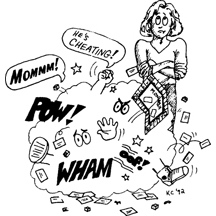 We need to teach our children not to hurt other children. Hitting, slapping, pinching, scratching, shoving, knocking down, hair pulling and biting are all unacceptable behaviors. Clarify for your child, “We don’t hit. We don’t hurt people. Disagreements are settled by talking, not hitting.” If children do fight, respond swiftly:

• First, intervene at the early shoving stage, or when the hand is raised. Don’t wait for injuries or screaming.

• Second, separate the children without questioning them. It doesn’t matter who you see doing the hitting when you come on the scene. That hitting could be a reaction to a previous blow.

• Third, send both kids to time-out in separate rooms. Another option is to send one child outside. If your child’s friend is aggressive at your house, time-out can consist of sending the friend home.

• Finally, model the type of verbal problem solving you want your child to use when he’s angry. That means no spanking and no rough handling.