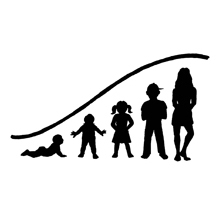 If you asked child experts what’s the ideal family spacing between children, you will probably hear most frequently about three years. But if you ask parents, it’s going to be very hard to find a consensus.

Susan Gates, a mother from Maine, says, “child expert Burton White doesn’t agree with us, but our children are fifteen months apart and they’re friends and playmates. We live in a rural area, so we wanted them close together. The house is often a wreck, but soon they’ll be off to school, and I’ll get organized then.”

From the other end of the spectrum come comments from Katherine Ring, an older mother, who says, “consider saving one child for later. Our planned late baby was a delight. Our ten and thirteen year old girls adored him and were enthusiastic baby sitters, entertainers, and teachers. Financially, his place in the family was good, since the girls had long-finished college before he was out of high school.”

Now mine are spaced exactly three years apart, which of course is perfect for me, but could I say otherwise? But I think the answer I like best to the question, “what is the best space between two children?” is “at least two rooms.”