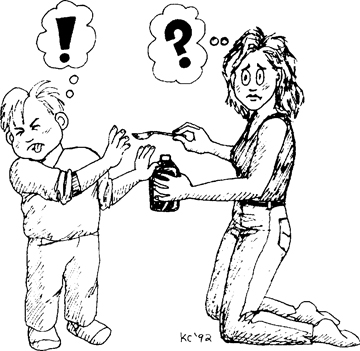 One of the hardest things about giving medicine to babies is getting it all down. Don’t try putting it in a bottle of juice or formula. You won’t know how much the baby has received if all the liquid is not taken.

â¢ Give a baby liquid medicine in a nipple; it will be sucked down instantly, then flush the nipple with a little water for the child to suck to be sure all the medication is taken.
Or, you can use an eye dropper or vitamin dropper or a disposable syringe that you can buy in the drug store for just these purposes. You can then squirt the medicine into the side of the mouth, which is quite easy to do.

â¢ If you’re giving a pill, you might want to press it between two spoons to crush it and then mix it with some applesauce or jam; just serve it by spoon at that point.

â¢ Seat a child in a high chair of infant seat rather than trying to give them medicine on the run. While most medicines taste pretty good today, if it doesn’t, you might want to rub an ice cube over a child’s tongue to kill the taste before and after giving it.

â¢ Now, if your child absolutely refuses medicines with clamped jaws, just gently squeeze his or her nostrils shut. Trust me, the mouth will open quickly.