Winners from the Holiday 2017 Report 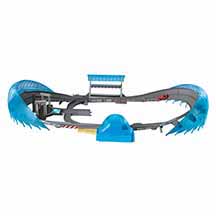 Despite the massive, long-lasting popularity of the Cars franchise and considering the theme of the movies, it is surprising that this is the first racetrack we have seen featuring the Cars license. Better late than never according to our testers, especially those with Cars fans at home. Disney might have waited but they got it right. At five feet long the set never feels cramped and gives the feeling of a real race as the cars shoot out of the battery operated booster and around the track. The fact that the cars can make it around and around that long track via the booster is a testament to the quality and power of the boost mechanism. The track has many great features including multiple track configuration options, a cool pit area and a grandstand that holds ten cars to watch the race. Another terrific design feature built into the track are the large plastic “car catchers” on each curve. Not only do these serve as an authentic accent to makes it look like a real raceway, it also stops cars from flying off the track. This Cars track can be connected to new and previous Cars playsets, ensuring the fun can continue whether your Cars are on or off the track. Parents were confident that any child who loves the world of Cars will love this set. Just make sure you have a place to set it up where you won’t mind hearing the booster because it’s probably going to be played with for long stretches of time.