Winners from the Holiday 2013 Report 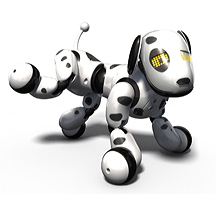 Zoomer is a small black and white Dalmation…and he’s a robot! To say that he was a hit with our testers would be an understatement. No matter the age, 5 or 75, Zoomer brought smiles and laughter wherever he went. Zoomer has so many features that endeared him to all. He follows many voice commands including “sit”, “lay down”, “roll over”, “play dead” and even “peepee” but without any mess to clean up afterwards. Zoomer knows his name and understands 3 languages. Zoomer’s tail wags when he is excited and his rump shakes. He barks, whines, scoots around, wags his tail, and sometimes will get bored, wander off and fall asleep. This last function is helpful when kids forget to turn him off or wander away. When he finally winds down after a long period of play his batteries can be recharged by plugging him into a USB port. He is extremely sturdy and is pretty much indestructible. Over two months of testing, remarkably, he does not have a scratch on him! The more you play with Zoomer, the more he learns and repeats but what’s more is the fact that the more you play with Zoomer the more you will fall in love.